We first published this photo in our Who, Where and When column when all such photos were in one album, but we recently saw it on our expo facebook page, posted by Ernie McCreight and decided to run again as a single article.  As stated at the time it sure is a "zany" cast of characters, and just who they are, where this photo was taken, and when it was taken are all answered below. 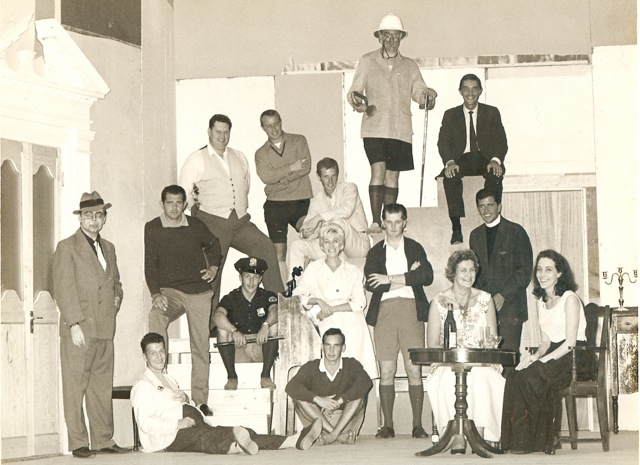 We heard from Dave and Penny Long on 6th April 2013, who had to wrack their memories but were collectively able to identify everyone in this photo which they were able to pinpoint to the cast of the Police Drama Group production of Arsenic and Old Lace performed at City Hall Theatre in May 1965.  Dave and Penny pointed out that the zaniest character at the top is none other than Mike Woods (CRO photographer). Others on the top row (l-r) are John "Tiny" Wakefield, Pete Rose, Roger Sherratt, and Dave Long.  Middle row (1-r) John Mulholland, Jack Rouse, John McQuaid, Anne Summers (Mulholland), Peter Parnell, and Mike Caulkett.  Sitting (l-r)  Eric "Wee Eckie" Laing, Bernie Burrell, Eileen Armstrong, and Jenny Wyatt.

The play was very well received and I seem to recall that several cast members were awarded Bermuda "Sun Burst" Awards for acting.  This was one of the last plays put on by our truly outstanding Police Drama Group which included actors, director, stage manager and backstage crew, lighting, and set design etc involving dozens of very talented police officers, along with their friends.