Apologies first for the delay in trying to sort out this photo.  This was a difficult one, partly because Riot Squads are supposed to be neatly lined up, but these guys are all over the place!

Many thanks to Terry Cabral for providing us with the photo which he also has displayed on his Facebook.  Terry advises that it was taken at Police Headquarters in 1977 while he was working in Admin, and that it was a great bunch of lads who were taking a break from Riot Training.

We have a few disputes about who is who, but here goes with what I believe are the closest answers so far:-

The Boys in Blue take a break! 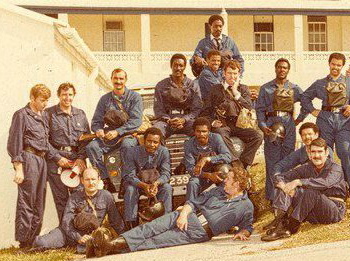 (Upper l-r)  John Baxter, Tony Smith, Steve Petty, John Lynchwade, Leonard “Shinah” Simons,  Carlton Adams (on top) although some think it might be Ralph Furbert.  (It’s almost impossible to believe Carlton in uniform, but Terry recalls that he had just been promoted and was back in uniform for a while.  Will check with Carlton to confirm it’s him but I’m sure Terry is spot on),  George Rushe,  Gerald Fletcher. 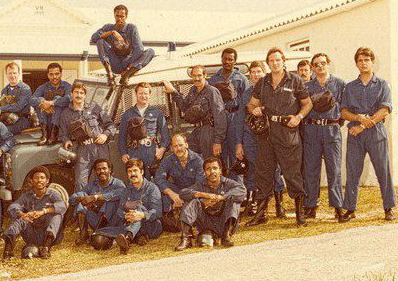 We can, of course be wrong with a few names.  Terry can you let us know who has been identified on your Facebook photo and whether we are close?  There was a suggestion the person we identify as Alan Barker might be Dave King but we will check that with Alan Barker in Nova Scotia.

Many thanks to everyone who gave their input.