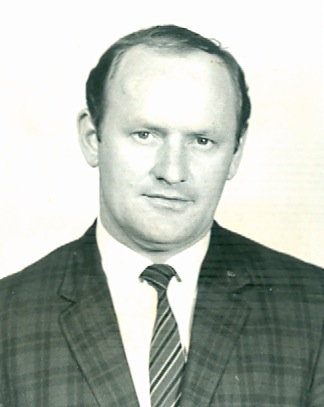 Bill was born on February 15th, 1938 in Sandholes, Cookstown, County Tyrone, Northern Ireland, the second son of a family of 8. His parents were dairy, pig and poultry farmers.

In September 1956, Bill was drafted into the Royal Ulster Constabulary during the height of the troubles between Northern Ireland and the Republic of Ireland and spent 2 years in the border town of Newry. 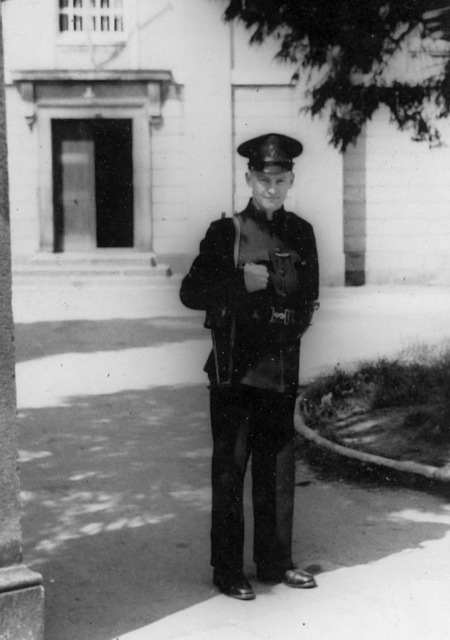 In September 1958 he joined the West Yorkshire Police Force, attending Pannel Ash Police Training College in Harrowgate after which he was posted for the next 3 years to South Yorkshire. In November 1961 he made an application to Crown Agents in London to join the Kenyan Police Service in Africa. After an interview, medical and being measured for a uniform he was told that he also required fingerprint experience. As he did not yet have this qualification, it was suggested that he go to Bermuda where there was a vacancy.

On February 14th, 1962 Bill arrived in Bermuda along with Tom Cassin and John Cooper for a contract period of 3 years. Jeff Payne arrived at the same time, but from Vancouver. The flight from London was on a B.O.A.C. propeller plane which landed in Boston some 13 hours later. Bill recalls that when he left London, it was raining. On arrival in Boston, it was snowing, but on arrival in Bermuda, it was warm and sunny!

Previously, he had no idea where Bermuda was and his only reference to the island was after reading an article in the News of the World entitled “Murder in Paradise” referring to a series of murders in Warwick, one of which had been committed on the Southland’s beach in the 1950’s.

His first assignment was to work for a very short period “on the beat” on a watch under the command of Sgt. “Bongo” Williams. He was a great man to work with and Bill remembers hearing for the first time how Bermudians reversed the pronunciation of their “V’s” and “W’s”. 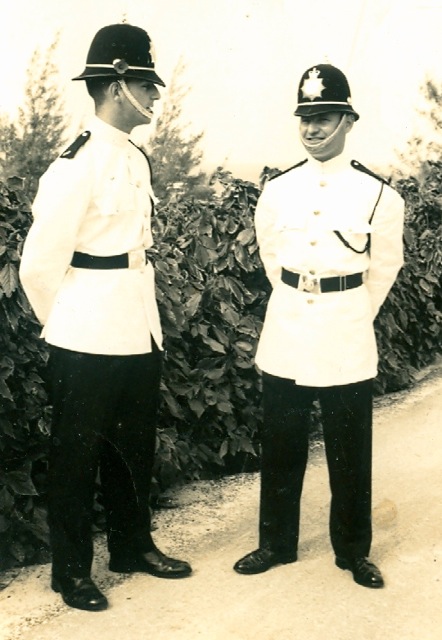 P.C’s Nick Hall and Bill Black taken
shortly after their arrival in Bermuda

He then moved to Cycle Squad run by Sgt. Sean Sheehan. The Squad was equipped with 500cc Triumph motorcycles so no “diddlybop” cycles got away from them. 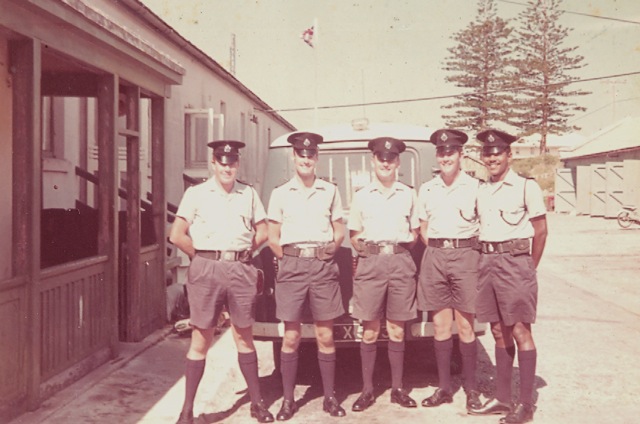 In 1966 he was transferred to Central C.I.D. and worked with “SueCheck” Mike Palmer. (Both had met several years earlier when Mike had served with “Guarda). The years spent in C.I.D. were fun and rewarding as a number of crimes were investigated and solved. One well known criminal, “Buck” Burrows was put away for 14 years for the breaking and entering of more than 200 homes. He was later convicted and hanged for the assassination of the Governor, Sir Richard Sharples. 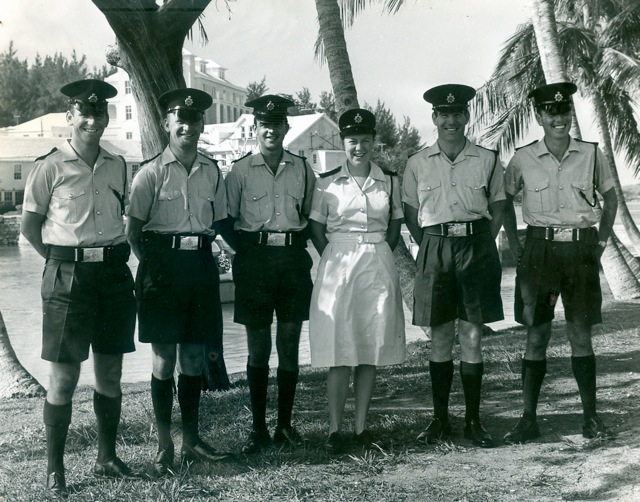 In 1968, Bill received Bermudian status. In September 1969 he bid farewell to the Bermuda Police Service and started up his own security company, “ Island Wide Security Services”. He was looking to purchase the only existing security company on the island, “Bermuda Security Services”, but as it only dealt with guard services, he decided to open up his own firm in competition. He began with criminal investigations and then moved into guard and cash escort services. In order to finance the start up of his company, he went to the banks and was offered a loan of 500 pounds with a deadline of 3 months to pay it back, however he was not able to secure any of their security business.

As time went on, the business flourished and he went from one office of 144 sq. ft. to several offices and an ever increasing number of staff, which included many former police officers.

In the early 1980’s, offices and stores were increasingly interested in installing burglar and fire alarm systems, so he ventured into the alarm business and started the first alarm monitoring station: “Bermuda Central Station” as a 24 hour a day operation. Initially the central station was located in rented premises. When the existing landlord realized that the office was being used on a 24 hour basis and not just from 8am to 5pm, he decided to double the rent.

As this was not a viable option for long term, Bill looked around for a permanent location and purchased a building known as “Ripley” at #42 King Street, Hamilton. This particular building turned out to be the highest point in the City of Hamilton. In 1983, all the security departments were moved into the new building under the umbrella of “Bermuda Security Group”. The business remains in this location today.

A highlight of his security career was being invited in 1992 by a delegation from “People to People” (originally created by the U.S. President, Dwight D. Eisenhower) to visit the K.G.B. in Russia and learn of their spy network. In essence it was: “C.I.A. meets KGB”.

Other notable events were: In 1968 when he had the first case in Supreme Court where colour photography was used. This was a case involving Erskine Durrant “Buck” Burrows for G.B.H.

On 26th September 1974 Bill married the love of his life, Susan (Spurling) at Christ Church, Warwick. They have 5 children and 9 grandchildren and are expecting more, with all of their children at present residing in Bermuda.

In 1979 Bill introduced the first inflatable “bouncy castle” for children to the island and it was used at the annual Christ Church, Warwick Christmas Fair. These have multiplied, with many for rent by various individuals around the island.

In 1983 he established the only fully automated alarm monitoring station for burglar and fire alarm systems, card access systems, as well as elevator monitoring.

In 1990 he started the first airport passenger and baggage screening service for all the airlines serving Bermuda.

In 2001 Bill sold his security business (Bermuda Security Group Ltd.) both in Bermuda and the Cayman Island and retired from the business.    He now spends his time travelling with Susan, playing golf several times a week, and looking after his rental properties and their residence in the Laurentides, Quebec, Canada.

Bill and Susan and family at the wedding
of their daughter, Rachel, in November 2012.
(l-r) Christopher, Rachel, Sandra, Emily, Caroline, Susan and Bill

Bill’s hobbies include trying to be a better golfer and growing fresh fruit and vegetable on their property in Paget for his family.    Bill is a member of the Bermuda Ex-Police Officer's Association and he and Sue regularly attend our functions. 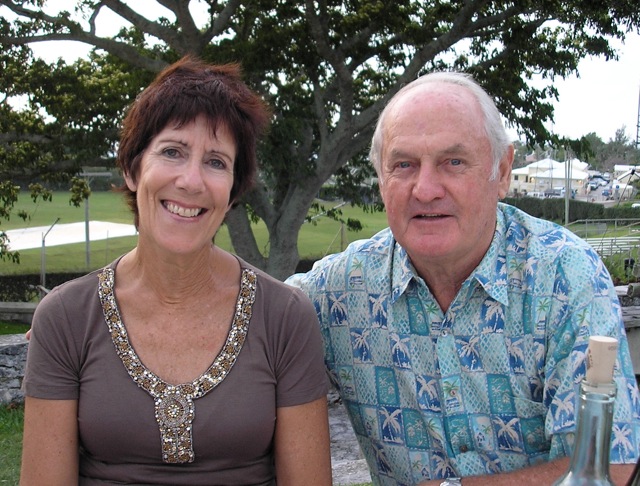 Update - We are very sad to report that after submitting this article to us, but before it was published, Bill passed away suddenly after collapsing in his home in Paget. We extend our deepest sympathy and condolences to Sue and their family.

Jon Santemma 8 years 2 months
We had the honor of playing Bill in the bi-annual golf competition with the US Eastern Seniors. He was a very worthy opponent, always gracious and always lot of fun to be with. He will be missed. Condolences to his wife, his family and his many friends.Editors note - Bill was a keen member of the Bermuda Senior Golfers who presently have a team touring the UK. Bill would no doubt have been with the team. He is also sadly missed by the BSGS. Many thanks for comments Joe. They are most appreciated.

Dick Johnson 9 years 1 month
Really sad to hear of Bill's passing, knew him well he will be sorely missed.Could that be Jim Woodward instead Of Mike Burke?Editors Note - We had wrongly identified the officer standing between Andy Heggie and Bill Black as Mike Burke, but Mike never worked in Cycle Squad. Dick was quick to spot the error and thought the officer might be Jim Woodward, but we can now confirm that it was Connel McBurnie.

Mike & Cam Burke 9 years 1 month
I worked with Bill for a short time in the '60s. He was a very keen and efficient officer. On two return visits to Bermuda, I met up with him and it was no surprise to me that he had done so well in the business world. Roger...I wasn't in Cycle Squad so it's a question for Who, when, where to name the man 2nd left. MikeEditors note - Mike is referring to this photo in Bill Black's "Then and Now" article. Can anyone assist in identifying the mystery person?

mike cherry 9 years 1 month
Our condolences to Sue and family and what a pity that the article was not published prior to Bill's death, so anyone thinking of writing an article "get cracking"Michael and AnneEditors note - We fully agree with Mike's sentiments. There is no time like the present to write you own story, especially if you have children and grandchildren who invariably love reading about their family history.