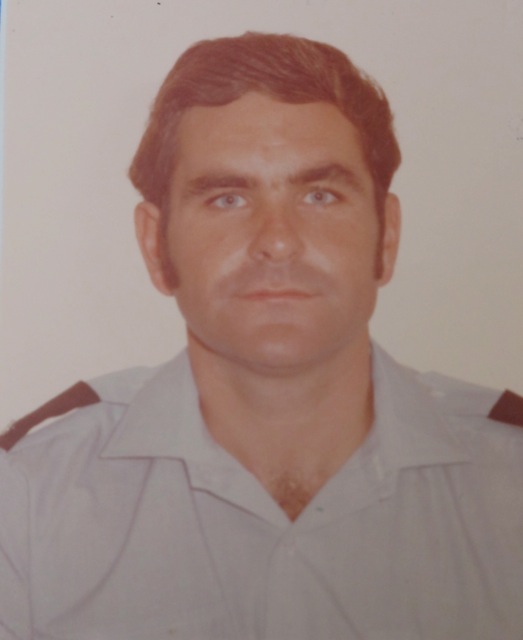 I was born in Portsmouth UK and I grew up in Bosham near Chichester, Sussex. I attended the Lancastrian Secondary School before joining Hampshire and Isle of Wight Police as a Cadet in 1965. I went to Sandgate Police Training School in January 1967 and on leaving in April that year, now a member of Hampshire Police, I was posted to Fareham before moving on to Aldershot the following year. In 1975 I answered an advert in the Police Gazette, or was it the Daily Telegraph? for the recruitment of trained officers in Bermuda. Either way I attended an interview in London resulting in a one-way trip to Bermuda in January 1975. On the same plane, as I remember, were Dave Cart, Graham Alderson and Pete Giles, among others.

On landing in Bermuda we were met by Sergeants Ian Scotland, Barrie Meade and later C/I Dave Parsons. My abiding memory on stepping off the plane was how warm and humid it felt, even in February. I would later discover how cold we would consider such temperatures!

After a ride in a transit van which had seen better days, we assembled in a classroom at Prospect, were given keys to a room in Barracks, and told to report to Jimmy Costello at Stores the following day. Some of us then retired to the “Court Street Diner” for a goodmeal. This establishment, together with the “Spot” restaurant and the “Green Latrine” (Lantern), would become dear to many hungry police officers of our intake. 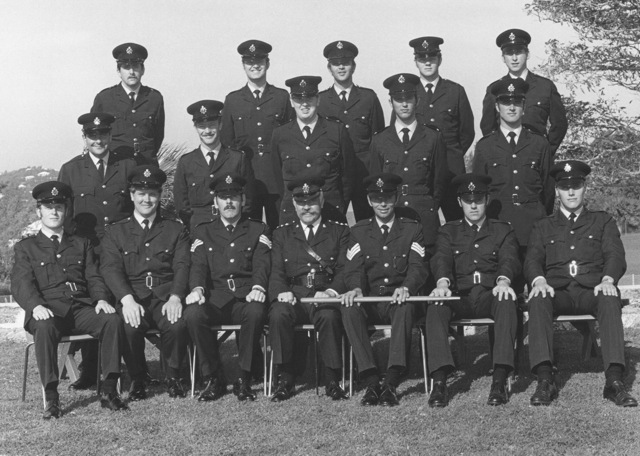 After a two-week familiarisation course I was posted to Eastern Division and lived in the magnificent accommodation block on the hill. Only a full size union jack flag was large enough to cover the hole in the ceiling of my room!

Within a few weeks I was posted to the “Stringy” Simons murder enquiry where I stayed until the squad was disbanded. During this time I was introduced to road running by Clive Donald. I also joined the Bermuda Police Rugby Club. The former activity I have continued to this day, of the latter, more later.

For much of the enquiry I was partnered with Bob Porritt. With him I met many locals both professionally and socially and I spent so much time at Trott’s Taxis that I could have got a job as a Driver.

With the bulk of the team disbanded I went to Central for a few months before transferring to Operations (Traffic). I confess I remember little of my time in Central except that I seem to recall Derek Fletcher as my Sergeant. That and the fact that the cells were on the first floor! I can’t say I enjoyed Central, although there were some amusing moments. 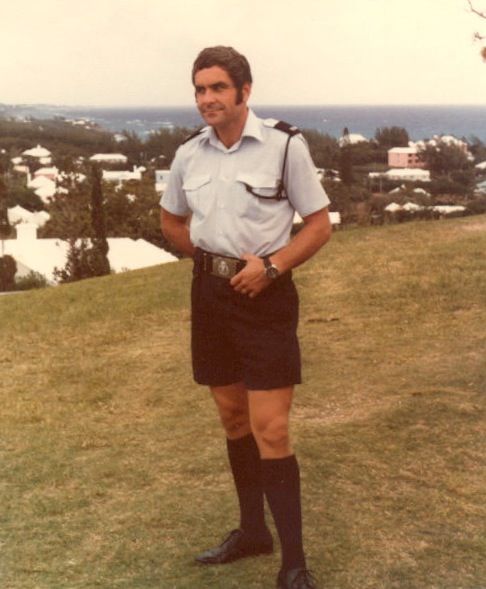 Mike Ross outside his home at Sandycote in Paget

Does anybody remember standing at the main entrance of the Bank of Butterfield and being asked stupid questions by Americans from the Rotterdam and the Veendam. Usually it was ‘where is the nearest bank?’ – we all know the answer they got. And then, of course, there was the Birdcage – an experience best forgotten.

Upon transfer to Traffic, around 1979, I joined ‘D’ Shift where I stayed until leaving Bermuda in July 1982 and had a great time. At the time of my transfer we were driving Morris Marinas – “Black and Whites” - but over the years we also had Mazdas and the Hillman Avenger. I have to say I quite liked that vehicle but at the time I was in a majority of one. I can still see my partner, Stan Francis, or “Big Stan” as he was known, hunched up behind the wheel almost fighting the car for space. There was precious little more in the passenger seat!

There were many notable moments but one which I will always remember was a chase when I was crewed with Frankie Foggo/Bagley. We were bimbling along the Harbour Road toward the main roundabout when a ‘Diddlebob’ on a Moby came across our bows having jumped the Stop Sign at the bottom of Stowe Hill. Both Frankie and I took umbridge at this and, as the driver, I decided to give the rider a ticket. This started a chase up to the roundabout, turning left towards Hamilton and then right across the traffic and up Corkscrew Hill against the one way system. I finally forced the Moby to stop at the junction with Middle Road. The rider got his ticket and poor old Frankie almost had to change his underwear. 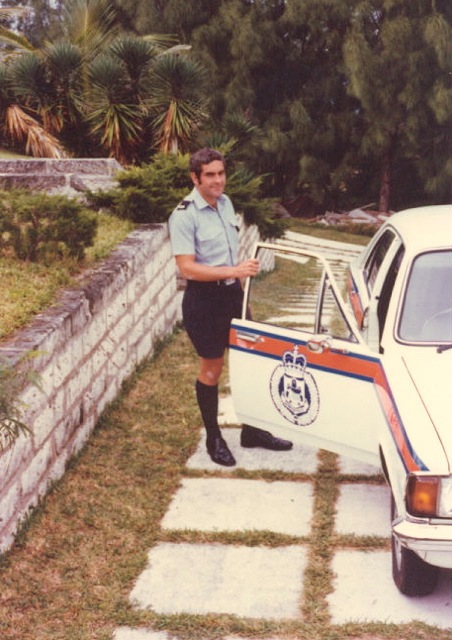 Mike Ross making a call on Wreck Road in Tango 6

Another notable ‘incident’ which should not pass unmentioned was one lunch-time when I was the cover traffic vehicle for the refreshment break. A call came out for attendance at an RTA (road traffic accident) in Warwick. Remembering the old adage, “never volunteer” I kept very quiet until Control Room had exhausted all other options and the ‘lot’ fell to me. Upon reaching the scene I found the usual moped (in those days) and car scenario - no serious injuries but a lot of noise from the ‘local’ rider. The vehicle driver, a certain expat governess (nanny), was sitting under a tree with two young children doing her best to comfort them. Having taken the report all parties went their respective ways, the moped rider still loudly bemoaning her fate and protesting her innocence. 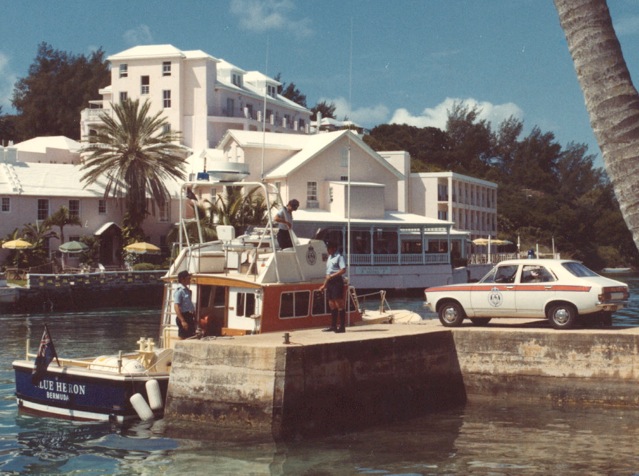 Mike Ross with Tango 6 rendezvous with Phil Every
and crew member on Blue Heron in Flatts Inlet
Just another accident – after all we dealt with lots on a daily basis. Well, not quite! In this case the expat governess subsequently became Mrs Mike Ross and we have remained happily married for some 33 years. Catherine, our daughter, was born in Bermuda in January 1982. The result of any process against the driver and rider – NFA of course.

No reminiscence of Policing in the period would be complete without a mention of the ‘Riots’ sparked by the execution of ‘Buck’ Burrows and Larry Tacklyn for the murders of Governor Sharples, and his ADC. I remember the teams driving around after the curfew ‘scooping up’ the curfew breakers and cuffing them to lampposts and other convenient street furniture for later collection. Unconventional, but efficient!

On the sporting scene who could forget the annual Police Boxing Evenings. I took part twice, the final time it was held at the Police Club and the next year at the Southampton Princess (now the Fairmont Southampton). As a social event it was unbeatable, as a display of boxing I have my doubts. 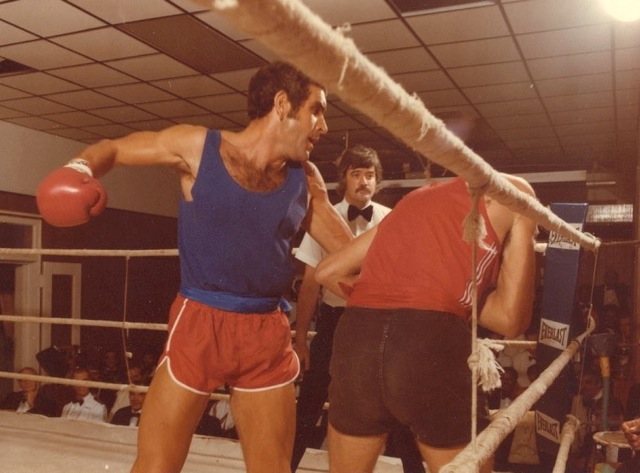 Mike Ross (left) in action against Bill Henry at the Annual Police Boxing Tournament
with Vic Richmond refereeing. This was the last time this event was held at the
Police Recreation Club before it moved to the Southampton Princess Hotel.  Mike won his bout.

I played regularly as a member of the Police Rugby Team (2nds) and whilst I was happiest as a tight head prop I did occasionally try my hand at No.8. The matches, the bar activities and the tours were all fantastic times, especially the latter where ‘what goes on tour stays on tour’ really was the order of the day. Unfortunately I had to stop playing after a particularly nasty leg injury. 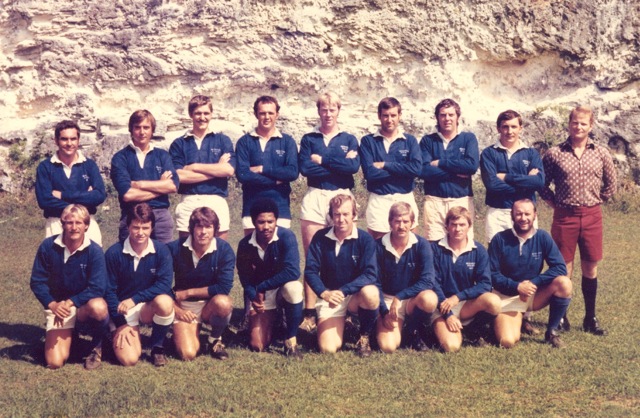 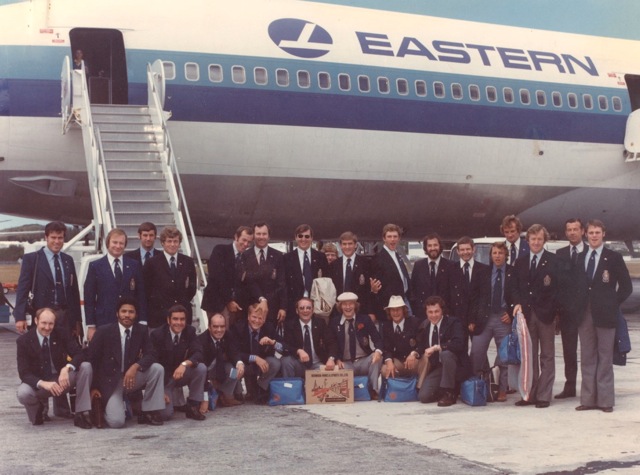 Police Rugby Team heads off for a tour to Montreal
(Can you assist us in identifying all those in this photo?)

I resigned from the Bermuda Police Service in June 1982, having served some 7½ years. I loved almost every minute of it but various personal reasons dictated that a return to the UK was necessary. On returning to the UK I rejoined Hampshire Constabulary where I remained until retirement in September 2004 with the rank of Inspector. How on earth did he bullshit his way to that rank I hear some of you ask?

I continued working part time as a Social Care Worker until December 2012 when I decided that as the Chancellor was going to give me more pocket money for not working it seemed like a good move to fully retire. If the British weather ever dries up I will have more time to pursue my hobby of walking. I also intend to rebuild my old Hornby 00 Model Railway layout that has remained boxed for some 40 years. I might even try my hand, or is it feet, at Morris Dancing. 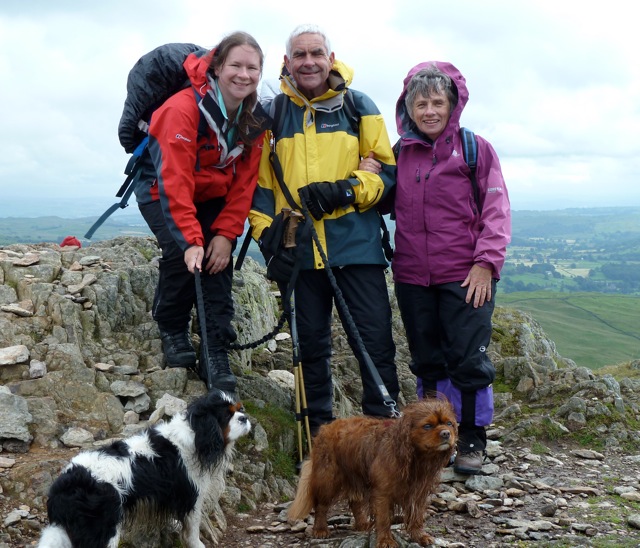 Mike with daughter, Catherine, wife Rosemary, and family dogs
Merlin and Bandit on holiday in the Lake District in 2011

Davie Kerr 8 years 5 months
I think the guys on either side of Phil Every are Brian Marlowe and Paul Guthrie (the blond), but am open to correction.