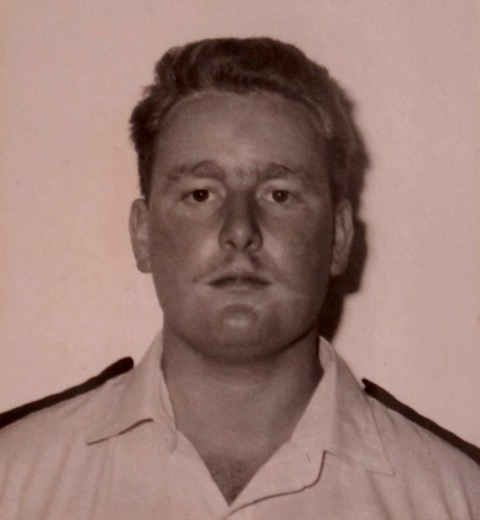 We were deeply saddened to hear of the death of our good friend and former colleague, "Tim" Barry Burch in Binbrook, Ontario, on 30th November 2018.

We had heard that Tim passed away a few weeks ago but needed to confirm the sad news before officially publishing it.

Tim had served in the Berkshire Constabulary as a police cadet, and spent 3 years in the Royal Military Police prior to coming out to Bermuda as a young Police Constable in May 1962.  While here he met and married the love of his life,  Patricia, who was working as a nurse at King Edward Hospital.  They married here in March 1963. Their first daughter, Sally Ann, was born in Bermuda.

Many of us will vividly remember Tim as one of the constables who was on duty outside BELCO on the morning of the BELCO riot on February 2nd 1965, when he and a group of unarmed police officers were attacked by the rioters,during which P.C. Ian Davies was very seriously injured.  Tim was one of the officers who protected Ian while he lay unconscious on the ground with a terrible head injury. 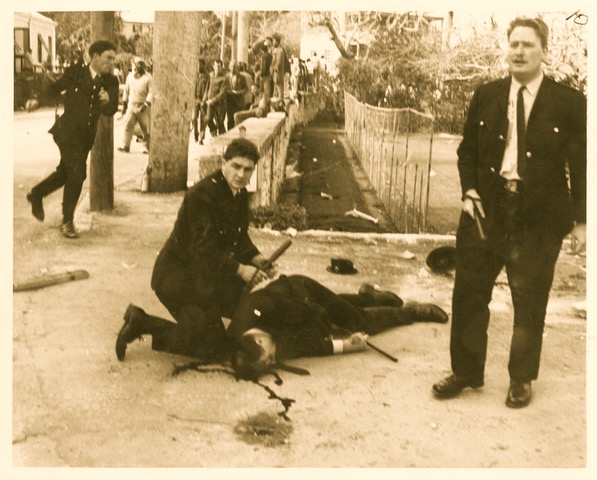 P.C. Ian Davies lying seriously injured on the ground outside BELCO being protected by
P.C. George Linnen (kneeling)  P.C. Andy Bermingham running to the
scene and P.C. Tim Burch standing to the right

At the end of his 3 year contract, Tim and Patricia returned to England for a while with Sally Ann, but they eventually decided to emigrate to Canada, where Tim became very successful  in the Insurance business.  Tim and Patricia had a second daugher, Joanne, and we understand that she is now serving in the Peele Regional Police and is married with two children -  a boy and a girl.

I just spoke directly with Patricia and offered our sincere condolences to her and their two children and two grandchildren.

Editors note -  The Royal Gazette published an excellent article about Tim Burch in this morning's newspaper which you can view at http://www.royalgazette.com/news/article/20190209/policeman-injured-in-belco-riots-dies-at-79

Young P.C. Tim Burch was present during one of the most traumatic events in Bermuda's history - the BELCO riot on 2nd February 1965 - and showed great courage in protecting fellow police officer, Ian Davies, as he lay seriously injured on the ground outside BELCO on that fateful day.  Tim was also seriously injured when he had his ear almost sliced off during the riot.